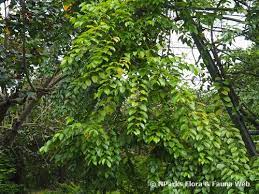 Uncaria is a genus of flowering plants in the family Rubiaceae. It has about 40 species. Their distribution is pantropical, with most species native to tropical Asia, three from Africa and the Mediterranean and two from the neotropics. They are known colloquially as gambier, cat’s claw or uña de gato. The latter two names are shared with several other plants. The type species for the genus is Uncaria guianensis.

Indonesian Gambier (U. gambir) is a large tropical vine with leaves typical of the genus, being opposite and about 10 cm (3.9 in) long. The South American U. tomentosa is called Uña de Gato.

Gambier extract is used or has been used as a catechu for chewing with areca and betel, for tanning and dyeing, and as herbal medicine. Gambier extract was also used by native people as a medical treatment or prevention of diseases that were believed to be spread by the now obsolete medical theory of miasma.

The Indians invented paan, a gambir paste, that was believed to help prevent miasma; it was considered as the first antimiasmatic application. The gambir tree is found in Southern India and Sri Lanka.

Chewing is an activity to chew the stems and leaves of gambier which is believed to strengthen the teeth. Gambir material will leave a reddish color on the teeth however, proved no easy brittle teeth, no cavities and healthier. But until now unknown actual effects. This habit has been left a young child for the former red color on the teeth are difficult to remove.

Gambier leaves contain a chemical substance called catechins. Catechins are one source of natural antioxidant benefits that can attack the affected system free radicals. These compounds are also believed to be a natural component to attack different types of diseases. Some countries believe this treatment is like India and Pakistan.

4. Facilitate the process of tanning leather

Since ancient times gambier benefits have also been used as an ingredient to facilitate the process of tanning leather. Flesh of certain animals such as snakes, fish, crocodiles and a variety of other types of animals commonly used for product and garment accessories. Gambir material makes the tanning process become faster and make the resulting skin is not disabled.

Since the red color produced on the tooth when chewing can stay in a very long time, then some experts develop traditional staining techniques Gambir. How to squeeze or pound the leaves and small stems gambier turns out, can leave the red color for different types of yarn and cotton materials. The red color produced will be sharper and can be combined with other colors. Even now batik makers began using the Gambir to dye batik cloth.

Various types of disorders or diseases of the mouth such as mouth sores, dry mouth, and gums injuries apparently can also be cured with Gambir. Gambir history to address these complaints can not be separated from their parents chewing habit in antiquity. Different types of material compounds found in Gambir able to handle every complaint mouth. The trick premises only chew or paste collision Gambir on injured part.

Burns often leave scars or black outer skin layer that is bubbling and leave the pain. To speed up the healing process can then use the material Gambir. Gambier leaves that have been crushed or mashed can be placed on the burns. The resulting chilling effect burns able to make a speedy recovery and minimize scarring.

Gambir can also be used as an acne medicine. Gambir which has been processed into a form which is then compacted extract will be processed again into a mask. The content of antioxidants in Gambir can make acne and pimples heal wounds without leaving a scar. The use of acne medicine twice a week also did not leave any side effects for acne.

Various types of premature aging problems will cause dark spots, wrinkled skin and skin would be more dull. Gambir extract benefits that have been formed into a mask could be a natural traditional treatments to make disappear all the symptoms of premature aging. Gambir will result in skin that is firmer, brighter and fresher. Gambir can be used as a cold powder extract materials such as white rice.

Ulcer disease attacks the stomach. The disease is often characterized by severe stomach ache and sore if it is filled meal. Stomach pain or heartburn can be caused by irregular eating patterns and consumption of foods that are too spicy. To treat ulcer disease can use Gambir extract that has been refined from Gambir dry. Gambir Mix with a little water and honey and consumption for two times a week.

Scientific research about how Gambir is working with Gastritis: