From this spring the people drink since centuries

The water comes out of the volcanic mountain of the Caldera Toba, the biggest volcanic lake on the world. It is filtered by the volcanic stones and it is 100% not processed. It is the pure power of the earth. Directly filled from the origin by the cooperative of the people of Sigapiton.

From an isolated village at the edge of Parapat city, Aek Sigapiton stands out and show it self to the world as Indonesia local bottled water that challenge foreign bottled water brand. Aek Sigapiton is a spring that located in Sigapiton village, Ajibata district, Toba Samosir regency. 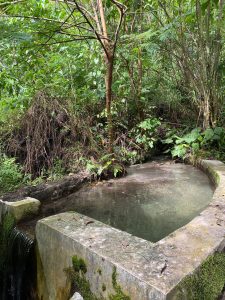 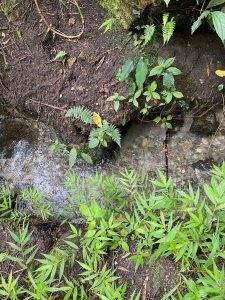 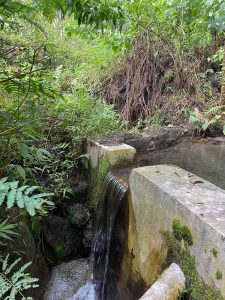 Bonani Aek is the source that people at Sigapiton use since old times. Since 5 years ago, the irrigation system for village was started to built. People usually use it for everyday life, like for cook, drink, and to irrigate their farm, so it become the pulse point of activity at Sigapiton.

Safety of the water

How the water can be polluted? It is until now not relly possible. Up on the hill is nothing of what can give pollution to the Lake. It is forest and then there is the heaven. The next polluter can be the new coming resort Area on the top of the valley. But the Government 100 % promised, that they will fully take care, that they don`t will make any pollution. Also the village will take care of it, when they fully understand what they have for a richness with their water. Since the village exists, centuries ago drink this water and there is not anz bad report about the water, which everyybody still drink unprossed – if not a Mom a teacher or a priest or neighbours or ….. other good people can see it.

But if you are close with somebody in Sigapiton, then everybody will tell you the secret, that you just can drink the water from the tap. And then if you ask the people, why they ccok the water, than they tell like:

“They tell us, we have to cook it, because it is more safe!” “I have seen in the television several times, that we don´t have to drink unboiled fresh water”

But the people also tell from rituals, when people are sick, where they have to use the unboiled water. In the Batak history all the springs have a huge also mystical meaning. Still some people in the village remember them.

In the village there are a lot of old people, which are still really strong and healthy. Maybe it make sense to research, why? Maybe it has also to do with the healthy water.

The water of Sigapiton needs to be tested as a mineral water. It could be really rich in minerals, like the most of the volcanic waters.

Maybe it can be get a new Appolinaris. The most famous mineral water of the word. They have the slogan: From this spring drinks the wolrd. This could be also a slogan for AEK Sigapiton.

The testing of the water is important for the villagers, that they believe their water again. And all of them drink it without processing again.

The water is getting filled in christal clear PET-bottles. If you put a PET bottle for 8 hours to the sun, then all bacterials and Virus are inactivated by the UV-light from the sun. This is a way which also in Indonesia is widely used to get safe drinking water in remote areas, were is no tested water around. This is also promoted by the World Health Organsistion (WHO) and the Indonesian Governement. The method is called SODIS. Here you can read more about this.

The Processing of the water

The water comes directly out of the mountain. There it is getting catched already by a construction by the governement. From there it is going down to all the houses with pipes. At any place the water can be taken and can be filled directly to bottles and to gallons. To get safe by any kind of Sabotation of the water, there can be a bypass with a fish testing system can be installed. This means some very sensitive fish are given in an Aquarium where all the time a part of the water from the spring go through. If there is any poison, then the fish will die. Then the water cannot be used for consumption until the reason is clear. This can be supervised also by all the customers by a webcam.

The water is getting filled in new christal clear 500 or 1000 ml PET bottles, which are strong enough to be reused at least for 10 years. And also they are getting fillled in 19 l Gallons. They are getting labelled by the people of the vilage.

In the next step it will make sense to buy a plastic extruder, to produce the bottle and the gallons in the village. The bottles and gallons are getting filled like they are getting sold. It don’t needs a huge storage for this.

With the AEK Sigapiton water we don’t want to sell one way water bottles. We want to reduce the waste. The bottles are to use for 10 years and for a refill. Therefore everybody who buy a AEK Sigapiton bottle can fill it for lifetime in Sigapiton for free. The price needs to pay is for the bottle.

Then we get the selling price for the bottles:

For wholesellers will be a discount of 30 percent.

Sandiaga Uno directly said, that they will buy the AEK Sigapiton water for the Caldera and he fully support the idea.

This needs to be executed in the next days. The next steps then are to promote the water around Lake Toba. First it needs to start in the Hotels and Restaurants in Tuktuk and Parapat. It needs to prepare a boat which transport the water. For this one or all of the stone tranporting boats can be used, which are already existing. The people can earn more money by transporting the water.

The water is getting sold in refillable bottles with a voucher for a life time free refill in Sigapiton. For this the people get recognized Sigaption as a clean and healthy village, where it needs to go. If there are offered now tours from Parapat and Tuktuk for expcusions to the village, then people will come as guests. The boats they are transporting the water also can transport the guests from and to Sigapiton in the morning and in the evening. Also on the boats can be sold other souvenirs from Sigaption. For this the villaage have to be cleaned up. The people, they offer food or drinks or souvenirs to the guest will getting the main energy that the village is getting clean.

Because the village will earn a lot of money from the water, they have to take care and will go on to develop their village for an ECO Destination. Guests which are focused on Eco Tourism are mostly guests which are more rich then the normal. For this rich people will come as guests to Sigaption. This fits with the Indonesian approach to call for foreign guests and alos with the customer, they will visit the Caldera.

The money will go direct to the village. They already founded a cooerative for the business activities of the village. The water will be the first activity which will create a profit.

The potential of the market

There is no reason, why somebody have to buy the drinking water from foreign companies anymore. This fully can be provided from Indonesian springs. The water from Sigapiton can be distributed around Lake Toba and also can be transported to Medan. The market exists and needs just to be provided.

WHERE YOU CAN BUY

You can visit the online store by clicking the links below:

“Hopefully this can evoke tourism, restore the economy, open up business opportunities, and create jobs for the society.”