Dear participants of the workshop,

from the Lake Toba Heritage Foundation (YPDT) we research since 3 years specially for the companies, they pollute the Lake Toba.

We fully support the results, the consultants from Deltares found out. We just want to highlight this result in the Presentation of Deltares:

All the fish farms at Lake Toba give the same Phosphate pollution to the lake than an impact of 2.300.000 people!

This means that the PT. Aquafarm Nusantara (PTAN), now owned by a Singaporean share based company, they produce 40.000 tons of fish a year, pollute the water in the same way, than nearly one million people with the production of their fish. We researched especially about this company. For us this is the most worse. The others like Japfa will not be (much) better! But Regal Springs already make around 40 % of the pollution from fish farms and nearly 30 % of all the pollution of Phosphates to the lake.

For what this fish of PTAN is getting produced?

Fish food is produced on the base of Cargill´s GMO soy from America and Brazil, treated with Monsanto´s Roundup, enriched with 0,5 – 2 % Phosphates, than transported to the lake and each day they feed 200 tons of this dirt to the lake. The fish is than getting harvested and transported with trucks alive for 6 hours to Medan, where it is getting processed and nearly all is getting exported. Around 80 % to America again. No food for Indonesia, only the dirt stay in the Lake!

Our Opinion about the Aqua farms

When we look at the scenario, what we can generate with your Excel Software Tool (DELTARES), than it is getting clear, that only ZERO-Production in open Cages can be possible. This is the standard of all open lakes in developed countries like US, Canada, Europe. There it is by law not possible to pollute the lakes by fish farms, they use pellets. Very easy. And this should be the standard also in Indonesia.

We want all fish farms out. If it is PTAN or JAPFA or others. All need to go. Today we just post on an US Web page this post, what we also publish on Facebook. Here we just go for the US-Tilapia and this is produced by PTAN:
“I live at Lake Toba in Sumatra in Indonesia. In front of our house there the Tilapia is getting grown for Regal Springs (www.regalsprings.com). They write they produce without hormones and ASC certified sustainable fish. They produce in one year there 40.000 metric tons of Tilapia where the most is sold in the US as an ASC certified Tilapia. A huge amount from the fish food is GMO-soy from Cargill treated with Monsanto´Roundup. Researches from Deltares.nl found out for the World Bank, that only this company pollutes the wonderful Lake Toba with the excrement of the fish in the same way than nearly 1 Million people. The whole load of the phosphates only of the fish farms, where the Regalsprings are 40 %, is around 80 %. The people living there only give a load of less then 7 %. The company use the Methyltestosteron (MH17) to transgender the fish. In the ASC Certification you can read, that they give the hormon/anabolica soup then to the rice fields.

A fish production for the ASC Standards is not possible in the US or Canada. Also no European Country will allow to give 200 tons of this GMO food to a lake. But with help of the WWF and the ASC you can do this in poor countries to destroy the wonderful nature there. Also in Indonesia a lot of people are against this and we are quite sure, the operation of Regal Springs is only possible with corruption. We have the testimonials, that Regalsprings tried several times to give corruption money. But only the people talk, they don´t take it. At the beginning of the year the Regent of Samosir in Lake Toba signed the contract for the Aquafarm again until 2029. Even he know, that he could not sign this because of the Sustainable Development Goals of the UN, they are also signed by Indonesia. After 2020 a fish farm with open ponds and pellet food is not possible by international law.

But we don´t want to wait, until the lake die. Already last year the ph go up to 9,63. Than the water of the 1000 square kilometer huge lake was manipulated with hundrets of tons of Polyaluminiumclorides (PAC). We accused them now with the Lake Toba Heritage Foundation (YPDT) by the police and the judge.

It is for the Lake Toba totally important, that the lake is an oligothrophic water. This is only possible without the Aquafarms. Then Lake Toba, the biggest volcanic lake of the world can be a Class One Destination for a sustainable tourism. This we want to develop. Please help us and don´t eat ASC-certified Tilapia anymore.

Tilapia wonderful can be produced in Florida with Aquaponic systems. The food and the fish don´t need to be transported. This will be also much cheaper and the waste water of the fish is a perfect nutrition for vegetables. And especially the fish don´t need to be transported for around 10 hours first on a boat and than alive on a truck on the bad roads from Lake Toba to Medan, where they are killed. The fish will produce a lot of Cortisol, a stress hormone, which also should can cause cancer.

To produce the US Tilapia in Lake Toba in our view cannot make more profit, than to produce it in the US with Aquaponic Systems. In our view this only make sense if the company work with fake invoices and tax declarations. If they don´t pay tax, than it make sense and it also can generate nice black money. We gave this thoughts to the Consul of America and also to the Indonesian Authorities. They have to look for this.

Save Lake Toba and come as a tourist, your Phosphates in the waste water in 20 days will be the same to our lake, than you buy 1 kg of Regal Springs Tilapia Filets in the US. And we will work on it, to make better water treatments. But for the first we need your help, that you don´t buy the Regal Springs Tilapia anymore!

Where is the benefit for Indonesia?

People from the Government told us, that the Samosir Regency not even get 1 Billion rupiah Tax from PTAN. In the ASC-Audits you can read, that there several time have been irregularities to pay tax and to bargain around, how much tax they have to pay. The Indonesian Government has to look, how much this company payed in total for tax. This we cannot research.

The other argument against to close the Aquafarms at once are the employees. They need an income. Lets look at this. There are the around 3500 workers of PTAN. The most of them just get the minimum Salary of 1,961,354 IDR. This are in one month 6,8 Billion. In one year this are 82 Billion.

If the government now close the Aquafarm at once, than the Government can overtake this 3500 people for one year as a worst case Scenario. (But we have the opinion, that the Aquafarms have to pay there damage to the lake, they have to go at once and have to be punished! This need to be cleared at the judge. Already this process runs by Initiative of the Yayasan Pencinta Danau Toba (YPDT))

Even the worst case scenario will be the cheapest for the Government. The Government can give also each worker the half of an annual salary at once under the condition, that they start an own Business to prepare the Lake Toba Area for Eco Tourism. After 6 month they can get the other half, if they really do it. Also the workers can built Cooperatives, than the Cooperative get the money.

A lot of things are to do, to prepare Lake Toba for an Eco Tourism destination. For a plan like this, also the Money from the World Bank can be used. All the new companies can work under the roof of the BODT.

Activities they can be done for example for: 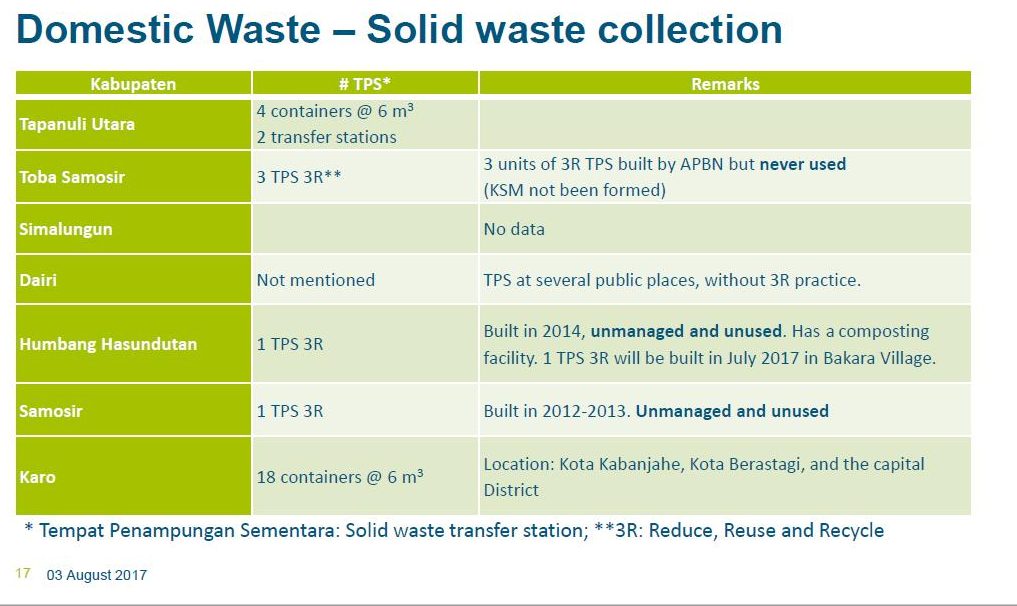